Hudson Miniatures’ “OLD TIMERS” Antique Auto Kits are rapidly assuming an important place among the notable contributions to Americana, as evidenced by the fact that many museums have started collections for permanent display. These nostalgia-provoking scale models of well-known vintage cars are so faithful in detail, so colorful in appearance, they have captured the imagination of thousands of hobbyists and collectors. “OLD TIMERS” help some of the latter to recall their own thrilling days as pioneer auto owners. For others, “OLD TIMERS” bring acquaintance with the romance and glamour of the early days of the auto for the first time. Since there are now more than 33,000,000 cars owned in America, it is not surprising that more and more people are becoming interested in the origins of the automobile. On the next three pages we are presenting famous automobiles that make up the Hudson Miniatures’ “OLD TIMERS” Antique line. These easily-assembled, completely prefabricated 3/4″, scale models have been developed only after long research and represent one of the most authentic hobby lines ever put on the market.

The first widespread commercialization of model-car kit occurred in the United States when some kits, being made of wood and other noncritical materials, came on the market prior to the actual ending of the war. By the end of 1945 there were approximately a dozen American manufacturers making such kits, mainly of military vehicles but including at least two racing cars, in 1/4-inch, 3/4-inch, 1-inch, and I 1/2-inch scales.* Among these were at least six kits for Jeeps, three for amphibious Jeeps, and three for Sherman tanks.

Most of these kits were in production for only a comparatively short time, although a very few carried over into the early 1950’s. The demand for most of these miniature vehicles obviously was a result of the war. It is generally acknowledged that in the United States the first really substantial trend of interest and enthusiasm and the main point of departure for the modern hobby of building model automobiles was in the area of models of old cars. This in turn had much to do with prompting the modern enthusiast to collect both models of old cars and old model cars. The first of the 3/4-inch-scale “Old Timer” kits manufactured by Hudson Miniatures of Scranton, Pennsylvania, appeared in 1947 and became literally an overnight sensation in the toy and model trade. These were kits incorporating primarily wooden components. In the initial kits of the series the wheels and small fittings were made of die-cast metal 1, but molded plastic was employed for these parts in the later output. As additional kits were introduced gradually over five seasons, not all the kits were made or can exist today in two distinct versions according to which material was used for the wheels and small parts, the later models having been produced only with plastic wheels and small accouterments.*

* Reference is made here only to the original Hudson Miniatures “Old Timer” kits with wooden parts. Aurora Plastics, Inc., somewhat later purchased the rights to the name and designs, and currently manufactures several of the same models in completely plastic form under the name “Old Timers.”

Both the kits themselves and completed models built up therefrom now are avidly collected, the kits being sought intact as collectors’ items in their own right. It would, indeed, be a hardy soul who, securing a Hudson Miniatures wooden kit today, would have the temerity to build it up into a completed model car instead of keeping it intact as a historical model kit.’ The actual production of these wooden kits halted in 1953 in the face of the by then rather wide availability of much lower-priced kits of molded plastic parts for both antique and current-type model automobiles produced by other manufacturers. While the sale of these wooden kits, which in the late 1940’s had universally been considered one of the most sensationally successful lines of all time in the hobby trade, did f all off greatly in the face of the competition of kits of plastic parts, it would be far from correct to assert that the latter suddenly killed the demand for the wooden “Old Timers.” The many enthusiasts who still sought them could be supplied from a very sizable remaining stock. What did write finis to the Hudson Miniature “Old Timer” kits was a disastrous fire that destroyed the entire warehouse stock in 1958, with the result that once readily obtainable merchandise immediately became scarce and much sought-after collectibles.

In all, there were twenty different 3/4-inch scale Hudson Miniature “Old Timer” wooden kits produced. The complete list follows, no catalog numbers ever having been assigned to any of the kits by the manufacturer, and the order of the list is not that in which the kits were introduced but follows the rotation on the last Hudson Miniatures order form (the first kit was the 1911 Maxwell and the twentieth and last model brought out was the Ford Model-T fire engine): 1904 Stevens Duryea, 1904 Oldsmobile, 1911 Maxwell, 1903 Ford Model A, 1900 Packard, 1911 Buick Bug, 1903 Rambler, 1903 Cadillac, 1910 Ford Model T (roadster), 1902 Franklin, 1906 Columbia electric, 1914 Ford Model-T fire engine, 1909 Stanley steamer, 1910 International Harvester, 1909 Ford Model T (touring car), 1911 Brush delivery truck, 1914 Stutz Bearcat, 1913 Mercer Raceabout, 1906 “Old 16” Locomobile, and 1914 Regal underslung.* In addition, four 3/8-inch scale kits of plastic parts were introduced in 1951 and 1952 by Hudson Miniatures. Designated “Little Old Timers,” they duplicated the prototypes of four of the 3/4-inch-scale wooden kits: 1904 Oldsmobile, 1911 Maxwell, 1913 Mercer Raceabout, and 1914 Regal underslung*. An additional series of four 3/8-inch plastic models was announced by Hudson Miniatures in 1953 but never put into production.

Following the success of the initial Hudson Miniature “Old Timers” kits, somewhat similar wooden kits were brought out by others, most prominently the Fador Manufacturing Company of Elmira, New York, who made the following seven 3/4-inch scale “Smallster” automobile kits, the first types appearing in 1949: 1904 Cadillac, 1905 White Model-F touring car, 1905 Reo four-passenger runabout, 1908 Baker electric, 1909 Hupmobile roadster, 1909 EMF 30 racer, and a 1909 EMF “three-in-oner” kit that could optionally be built up either as a roadster, single rear seater (a type with a second seat for but one additional passenger), or a touring car. The Mod-Ac Manufacturing Company of Los Angeles, California, made kits for a 3/4-inch-scale 1902 Pierce and a 1/2-inch-scale replica of the 1877 Selden car, the scaling down being in relation to the full-sized Selden vehicle constructed on the 1877 design in the early 1900’s. As accessory units primarily brought into being by the popularity of the Hudson Miniatures’ kits but suitable also for use on other makes, Aristo-Craft Distinctive Miniatures of Newark, New Jersey, brought out five types of brass head and sidelights fitted with miniature working bulbs for those who desired to add working lights to their display models of old-time automobiles.

* The molds for the four 3/8-inch-scale “Little Old Timers” kits subsequently were sold by Hudson Miniatures to Revell, Inc. Revell did not use these molds in the United States but sent them to England, where kits were produced from them. 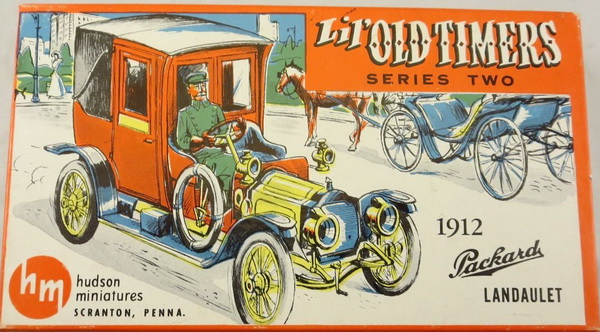 There appears no inclination even on the part of the most iconoclastic members of the model-hobby fraternity to dispute the fact that it was the Hudson Miniatures 3/4-inch scale “Old Timers” kits that really were responsible for the great boom and enthusiasm in model-automobile building, or that the entire model-automobile hobby and kit industry of today owes a tremendous debt to Hudson Miniatures and the pioneering and promotion of its proprietors, A.J.(Tony) Kovelski and Doris Hudson. 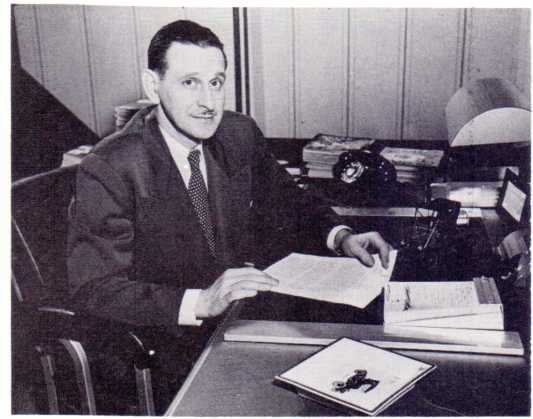 It is interesting to note that Mr. Koveleski himself was-and is-a most zealous collector of both real old automobiles and of old model cars. A completely outgoing personality, he put a promotive effort behind the “Old Timers” kits of a fervor and compass never previously seen in the hobby business, including radio and television appearances, an enormous advertising campaign in some fifty national magazines, and, above all, his numerous personal appearances in one or another of his old automobiles, especially in his meticulously restored gleaming yellow 1914 Stutz Bearcat, probably the most famous antique automobile in America. Just one of his exploits, which garnered reams of publicity for model cars all along the way, was his famous “Chicago or Bust!” trip in the Stutz from Scranton to the World Hobby Exposition in Chicago in 1951. It is probably not too much to say that, apart from the role the Hudson Miniatures “Old Timers” kits played in stimulating model-car building and collecting, they undoubtedly were one of the major factors in creating the widespread interest in real old automobiles and in automobile history in general that became increasingly notable in the late 1940’s and 1950’s.

The foregoing, however, has brought us well past World War II and into what most enthusiasts consider the modern, or current, era of model-car history and of the model-automobile collecting hobby. Having thus circled back to this point, it is time to proceed with further information on the techniques and customs of the active side of model-car collecting as it is practiced today.